I wrote sad anime list that available on Hulu now!

Some animes make us sad but we remember them well and some we don’t forget for a very long time. Watching sad anime maybe a little unpleasant but definitely a lasting good pleasure.

I wrote sad anime on hulu list that we think will give you this pleasure. Let go of your troubles for a little while, these animes will give you enough sadness. Kousei Arima was an outstanding child pianist praised even by accomplished musicians. However, when his mother dies, Arima has a hard time coping with it and he cannot hear the sound of his piano due to the trauma.
As Arima’s life gets worse, he meets a beautiful violinist, Kaori Miyazono, who encourages him to play the piano and enters a competition with him. All of this helps get Arima out of his depression, but Kaori is hiding a harsh truth that could push his back to the limit. 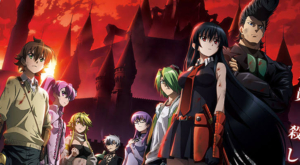 While watching Akame Ga Kill! you will cry more every episode, as long as you connect to the anime. When the anime is over, you will have no tears and you will love and hate the drama at the same time.

If I’m making a list of ‘Sad anime on hulu’, Akame Ga Kill should definitely be on that list, if you like crying for hours over an anime, I recommend Akame Ga Kill! Plastic Memories takes place in the near future where there are androids that look exactly like humans. SAI Corp android company has introduced a new android model called Giftia which is the most humanoid android ever.

If Giftias expire at 9 years and 4 months, Giftias experience personality disintegration, memory loss, and bursts of violence. There is a team called Terminal Services to retrieve expired Giftias from their owners and erase their memories. A group of young adults living on Mars rebel against them and start their own security company for freedom. Death Parade has a very interesting plot: In the anime, people walk into a bar without remembering anything, and the bartenders with two dead people play a death game. As a result of this game, one dead person will go into nothingness, and the other will be reincarnated. There are many strange warnings and rumors about the underworld of Ikebukuro in downtown Tokyo, about unknown gangs and dangerous inhabitants. Among these urban legends, one urban legend stands out more than the others; The presence of the “Black Rider”, who rides a pitch-black, silent motorcycle and is said to have no head under his helmet.

Mikado Ryuugamine witnesses the Black Rider on his first day in the city, and chaos erupts in Ikebukuro when supernatural events begin to take place. Chika Kudo’s grandfather believes that Chika does not understand the depth of playing the traditional musical instrument called the koto. Chika tries to join the Tokise High School Koto Club to understand Koto’s depth as his late grandfather wanted.

Kono Oto Tomare is about the koto club of energetic young people who want to play in the national competition. This is the lowest ranked anime on the ‘sad anime on hulu’ list, but if you watch it with low expectations you will love it.

Mirai Kakehashi leads a life of pain and despair, being harassed daily by him relatives after him parents died. Mirai can’t take it anymore when his pain brings him to the edge of the cliff and he jumps into the abyss. However, instead of dying, he meets a winged being who claims to be his guardian angel. A guardian angel named Nasse gives him two invaluable abilities and persuades him to continue living.

Armed with the abilities bestowed by Nasse while wishing to die once, Mirai faces off against 12 people, one of whom will be chosen to become the next God.